The National bird of Scotland is Golden Eagle. Its scientific name is Aquila chrysaetos. It belongs to Phylum Chordata a class of Aves the order of Accipitriformes a family of Accipitridae and kingdom of Animalia. As the name suggested the color of birds are dark brown. It has lighter golden-brown plumage on the back side of the neck.

This species of young eagles have a white color tail and often have white markings on the wings. This species of the bird use their agility and speed combined with powerful feet and massive sharp talons to snatch up a variety of prey. like rabbits, hares, marmots and other ground squirrels.

Eagle has strong eyesight for searching food, strong feet for holding food, and a strong curved mouth or bill for tearing flesh with heavy heads and beaks.

Scotland Eagles are strong, large, powerfully built. Hunt and feed on animals and also birds that eat very small insects. In most human populated areas its appearance is very limited or totally disappears. But still in some areas it is found honestly omnipresent.

Just like mostly found in Eurasia, North America, and parts of North Africa. It is only found in Scotland not in other parts of UK.

The smallest species of this bird have relatively longer and more evenly broad wings. Quick and exact target attack and faster flight despite the reduced size of aerodynamic feathers. Due to powerful eyesight, it has 3.6 times greater human insight for the eagle.

This powerful eyesight enables them to mark prospective target from a large distance. The intense eyesight ability is primarily attributed to their very large pupils which guarantee minimum diffraction (scattering) of the incoming light.

There are many types of an eagle .The golden eagle is the 2nd largest of all species. The other common species of eagle (bald eagle) having snow white -feathered head and white tail is the proud national bird symbol of the US. In near future, it is obsoleted.

For many years bald eagles were hunted for sport and for the protection of fishing grounds. The double-headed eagle which is very familiar in Russia.

Due to its popularity and government level acceptance, it is featured on Official and personal coats of arms, stamps, coins, and military flags of Russia. In Aves, world eagles have a top ranked because of its size and power of many eagles (raptor) species as they are the food chain apex predator (carnivore, meat eater).

The Meaning and History of Golden Eagle 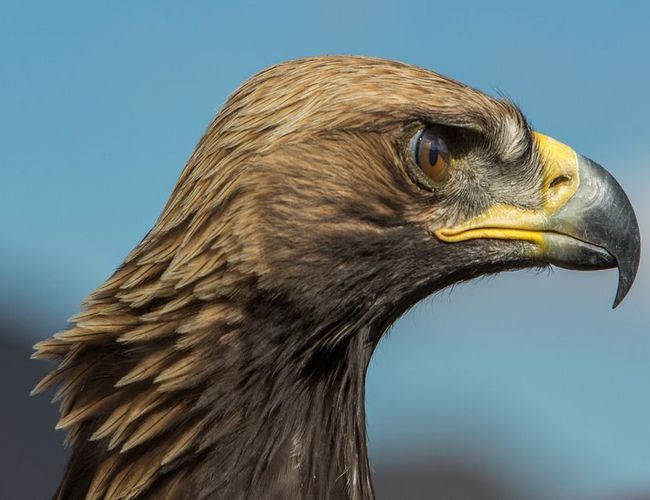 The history of golden eagle dates back to 1758 Linnaeus  described it for the first in his Systema naturae as Falco chrysaetos. Since most of the eagle, birds were grouped largely on the basis of apparent characteristics at that time.

So many of them were grouped by Linnaeus in the Falco genus. Zone or area was given simply as (Europa) which was later fixed to Sweden. Later on, it was stimulated to the novel species Aquila by French ornithologist Mathurin Jacques Brisson in 1760.

Why is Golden Eagle the national bird of Scotland ?

The charming and powerful bird exist in 431 pairs in the whole Scotland. Because here they are safe and feel good and reasonable environment. Due to its population and enormous quality a Petitioner Stuart Housden OBE on behalf of RSPB Scotland requested the Scottish parliament and government to officially declare golden eagle as national bird by taking the majority of people opinion.

Also suggested him that this can be done either through legislation, or through a parliamentary motion. After his hard work and interest in this regard finally on 1 April 2014 he Committee agreed to write to a number of Parliamentary Committees.

On 3 June 2014 second success achieved Committee agreed to write to the Scottish Government. Finally on 23 February 2015 the Committee agreed to close the petition under Rule 15.7. After this decision they invite RSPB Scotland to undertake or arrange a public opinion on whether a national bird of Scotland is needed or not and, if so, what it should be.

So after public opinion and majority vote the golden eagle becomes an icon of Scotland wild, printed on company logos, place names and ancient burial sites etc. Due to all these facts golden eagle becomes the national bird of Scotland country. This was a detailed guide and information all about Golden Eagle bird. Kindly let us know your thoughts about it in comments.

The National bird of Russia is Eagle or Double-headed Eagle. It belongs to Phylum Chordata a class...