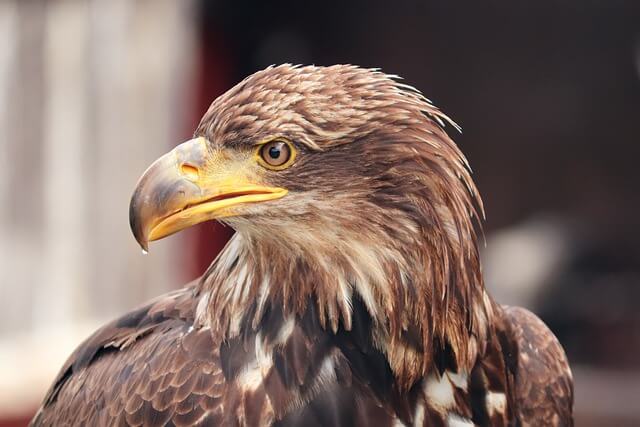 The Albanian Golden Eagle is the national animal of Albania. It represents bravery, freedom, and the spirit of the nation.

Albania is a mountainous country, so this eagle lives in the mountains and is a symbol of Albanian pride. Albanian people are also brave and strong as eagle

In the past, Albania was known as a country of eagles. As its symbol, the Albanian eagle is reflected in the national flag and is also used for nationalistic folkloric songs.

The golden eagle (Aquila chrysaetos) is one of the best-known birds of prey in the Northern Hemisphere.

The golden eagle (Aquila chrysaetos) is the largest bird of prey in North America. It is distinguished from other eagles by its larger size, more massive build, darker coloration, and broader wings. It is one of the most widely distributed species of eagle in the world.

The vast majority of these eagles live in mountainous areas where they build their nests on rocky cliffs. They feed mainly on small mammals and birds, which they hunt from above while flying at high speeds.

The golden eagle’s body length can range from 66 to 102 cm (26 to 40 inches) and wingspan from 180 to 230 cm (71 to 91 inches). The golden eagle’s tail feathers are proportionately longer than those of most other eagles, reaching up to 44 cm (17 inches) in length. Sexes are similar in plumage, but females are about 25 percent larger than males. Adults’ feathers are brown with a white head and tail. Juveniles’ feathers have a blackish-brown appearance with a white base on each feather that gives a mottled effect.

Why is Golden Eagle the National Animal of Albania?

The golden eagle was chosen as the national animal of Albania in 2010. The Albanian government decided that they wanted to raise awareness about the country’s biodiversity by introducing more wild animals into their population. They chose this particular species because it was already native to their country and would not require any additional resources for conservation efforts. So, due to all these facts, Golden Eagle declared as national animal of Albania.