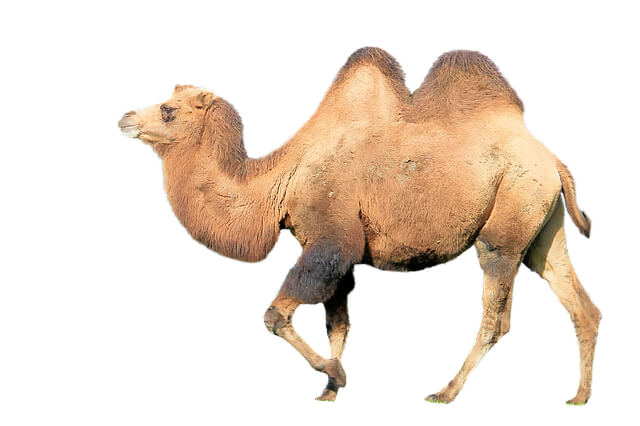 The Arabian camel or the dromedary is the National animal of Saudi Arabia. The scientific name of Arabian camel is Camelus and belongs to family Camelidae.

This animal is also known as the ship of the desert due to its ability to travel in hot and dry deserts and also through sandy regions. It can go without water for several weeks but can drink up to 30 gallon in a single day when it gets access to water.

It is a mammal that has been domesticated by humans for thousands of years and have been used for transportation, carrying loads and even ridden in rides. People in Saudi Arabia prefer camels for transportation and travelling from one place to another.

The camel is used in many ways by the Bedouin; from meat and milk to transport animals or people in difficult terrain, even tents were made from their skin. The camel has kept people fed and alive for many years across Arabia and other parts of the world such as North Africa.

The national animal Arabian camels have long legs, broad hooves and flat foot pads which makes it easy for them to walk over the sand dunes of the desert. They have thick lips which allow them to eat thorny plants without getting hurt. Their hump is formed by fat tissues which keep their body warm in cold nights and provide energy when they do not get food for days.

Facts about Camel: The national animal of Saudi Arabia

Why is Camel the national animal of Saudi Arabia?

To understand why camel is the National Animal of Saudi Arabia we need to look at the geographical condition and history of this beautiful country. The geography is mostly desert, and the people in this country have been relying on camels for centuries for trade, transportation, milk and meat. Camels are common in almost every part of the world and it can be found in regions like Africa, Middle East and Asia.

The camel is known as “Ship of Desert” because it was used for transportation in deserts. Camels are very strong animal and can carry heavy load for a long distance on their backs. They can go days without water i.e the camel is adapted to the dry climate of the desert.

The hump on a camel’s back helps them survive without food or water for several days because it stores fat which is used when food and water are not available. Camels also have long eyelashes to protect their eyes from sandstorms which they encounter while traveling across deserts.

Due to all these facts, Arabian camel considered as the official and national animal of Saudi Arabia.