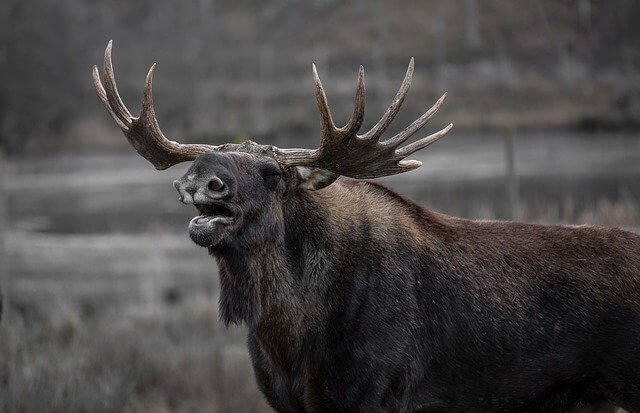 Moose is the official state animal of Maine. Moose are one of the most recognizable animals in Maine, and can be seen throughout the state. The state legislature voted to make the moose the Maine official animal in 1979.

Moose are a large, shy, and gentle animal. They are a smart species that have a digestive system that allows them to eat tall plants and trees along with grasses and shrubs.

According to National Geographic, moose can be found across Canada and Alaska, as well as in sweden, maine, and northern regions of the United States. These large animals enjoy habitats with coniferous forests that include thick underbrush and swamplands. They can also be found in open meadows if food is plentiful.

Moose are large animals. They are usually about six feet tall at their shoulders. They can weigh over 1,000 pounds. The males (bulls) have antlers that can spread six feet or more from tip to tip. Moose use their antlers to fight other males when they want to mate with a female.

Do you know? Moose is also the national animal of Sweden

Why Moose is the state animal of Sweden?

There are many reasons why Moose is the state animal of maine? A few of them are as follows:

Moose is the national animal of maine as well as sweden. It is also known as “The King of the Forest“. The scientific name for moose is Alces alces and it belongs to the Cervidae family. Moose are the largest members of the deer family.

Though the official state animal of Maine is the moose, there are many reasons behind why this large animal was chosen. Moose are large, antlered animals that are a common sight in the northern forests of New England. They also have a long history with people who have lived in the area. The state of Maine is heavily wooded and has many lakes and ponds that are surrounded by marshy areas.

There are about 40,000 moose living in Maine, and they eat about 80 pounds of food each day. They have been known to eat up to 500 pounds of food in one day. Their diet mainly consists of leaves, twigs, bark and buds from trees such as willow, birch, maple and poplar. Due to all these facts, moose declared the official and state animal of maine.