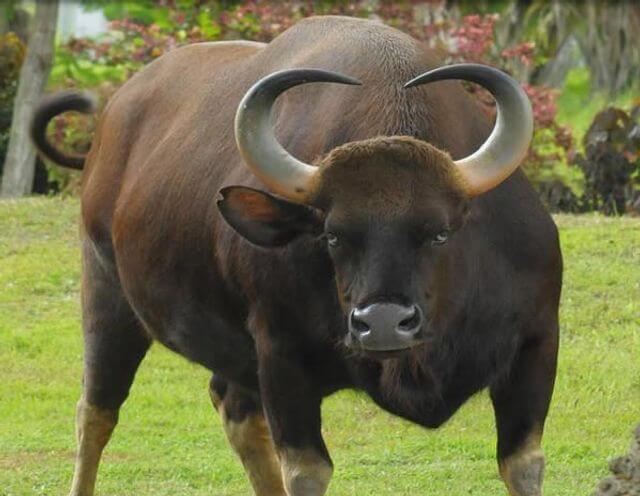 Kouprey (Bos sauveli) is the national animal of Cambodia. It is a species of wild cattle found in South Cambodia. The scientific name of Kouprey is Bos sauveli and it belongs to the family Bovidae.

The scientific name for the Kouprey is Bos sauveli. The Kouprey is a large, bovine mammal that resembles an ox (a castrated male cow). They are said to have been Asian wild cattle that were domesticated for agricultural purposes around 10,000 years ago.

It looks like a bull with a pair of spiral horns. It has very long legs and hooves. Its back is in the shape of an arch and its neck is thin. The whole body of a Kouprey looks something like a buffalo but it has straight horns which are extremely long and spiral in shape.

The Kouprey are gray or black with long horns that curve forward. They have a continuous ridge over their shoulders that forms a hump. Females stand 1.5 meters tall and weigh around 700 kg while the males are slightly taller at 1.7 meters and weigh around 800 kg.

Kouprey live in herds of three to ten females and young led by a single male. They occupy mixed deciduous forests during the dry season, but move to grasslands during the wet season where they can graze more easily.

They are elusive animals which are rarely seen, even by local people who know their habitats well; however, they have no natural predators other than humans, so their paucity is not due to predation pressure.

Why is Kouprey the national animal of Cambodia?

The reason why the kouprey has been chosen as the national animal of Cambodia is because of its unique features. It is a large wild bovine found in the grasslands and forests of Southeast Asia. The kouprey has a very long body with a humped back, thick hair on its neck, and large horns. Its tail is rather short for an ox, with a tuft of hair at the end.

Another interesting feature about this cattle is that it has two dewlaps on its neck. The kouprey also has distinct dagger-shaped markings across its shoulders and back.

Due to all these reasons, kouprey has been declared as the national animal of Cambodia officially.